Accessibility Review of the Kenwood TH-D74 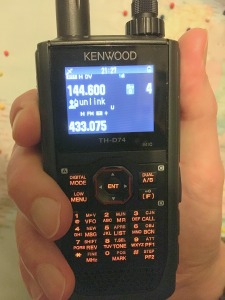 I was contacted by Jim MI0JPC in September 2016, asking if I had any accessibility information on the new Kenwood TH-D74 handheld. The model had been discussed on the Active Elements email group a few weeks earlier, but despite the radio’s obvious potential, no one had any firm details.

The TH-D74 had the prospect of being the first handheld with full speech output and accessibility to D-Star. I have very limited experience of using handheld portable radios, and the low cost handheld I reviewed a few years ago only ’spoke’ the key that had just been pressed. It could not be interrogated further to learn the current frequency, and it left me feeling that only part of the accessibility job had been done.

The Kenwood TH-D74 had the potential to be fully usable by a blind amateur, and the spec was impressive. It is a 2m and 70cm Dual Band handheld with full voice Guidance and D-Star. It has GPS, APRS, wide band coverage, including SSB on 2m and 70cms, and FM broadcast coverage. It would offer a plethora of programming possibilities, without a blind operator having to remember a set number of beeps or clicks.

Basically, the radio sounded like an ideal unit to review for accessibility. I asked Mark M0DXR of Kenwood UK if he would loan me a unit, and I have to say a big thank you to Mark for sending me the review radio for a couple of weeks. To make sure I could get onto the D-Star system I was also loaned a Digital Voice Access Point DVAP by Jeremy G4JZL.

Before receiving the radio, it seemed a good idea to prepare myself by grabbing the PDF manual from the Kenwood site. While 99.9% of the manual was easily read by using PC screen reading software, some buttons, such as the arrow keys, are shown graphically as pictures of arrows. When read with a screen reader, a picture is ignored. So, for example, when I read the PDF manual, I learnt that you turn on the power by pressing [ ]. OK, you can work this one out, but if the command involves presses of several buttons that include the arrow keys, and these are being ignored, you cannot learn how to operate the radio.

I can fully appreciate the PDF manual will refer to a button as Menu, because Menu is written on the actual button. Likewise, if an arrow is printed on the real button, it makes perfect sense to show a picture of the arrow symbol in the manual. Sighted readers naturally expect this kind of consistency.

When you consider the tremendous effort Kenwood have gone to in making this radio accessible for blind operators, it is such a shame the manual is so hard to use. It would be incredibly helpful if Kenwood would produce a separate text only manual. The graphics being ignored are a very small number, but nevertheless, crucial!

To get over the immediate hurdle, I extracted the text from the PDF manual into a document, and Steve M6HFH went through it, replacing the blanks with text labels, such as ‘Right Arrow’ and ‘Power On/Off’. Jim MI0JPC has subsequently divided it into separate TXT files for easier navigation.

Discussing this with blind amateurs on the Active Elements email group, folk indeed like using text manuals, particularly for the ability to rapidly navigate and search them. There is general agreement that both PDF and HTML documents work extremely well, if properly structured.

I was able to rapidly establish that as a standard analogue multi-mode handheld the D74 has excellent accessibility, but the handheld also offered unparalleled access to D-Star. As primarily an HF operator, I only had a notional idea about D-Star, and I had found it easy to overlook. Having now used it, I’ve come to the conclusion that it is just another way of communicating, but with some great benefits. For one thing, you can talk and exchange greetings and ideas anywhere in the world, do so in audio comfort, and without the need for a large antenna system. This could be a great way of continuing with the hobby if you have severe antenna restrictions or even if you go into a residential home.

Getting D-Star working is a great deal easier if you already know someone using it. Rob G0WSC has been using D-Star for a while, and was able to answer many of my questions. There is a fair amount of new terminology to learn and initially the plethora of connection methods is daunting. This is not just initially daunting for the blind amateur, but seemingly for many operators. Like many things in amateur radio though, the picture becomes much clearer and simpler the more you use it.

As I’m a long way from a D-Star repeater, and very unlikely to be able to access one with a handheld, G0WSC suggested I use a Digital Voice Access Point or DVAP, and connect directly into the D-Star backbone. This means I could bypass the Repeater system. This inevitably means my review of using the D74 might well be different from your experience!

A quick note about the DVAP. I was loaned a 2M DVAP by G4JZL for the period of the evaluation. The DVAP connects via USB to a computer, in my case a Windows PC, and the appropriate software is installed. The Th-D74 then transmits and receives on a simplex frequency, in DV mode, using the DVAP.

The DVAP Windows software is not without accessibility issues. I found the setup screen did not give any feedback , using any of my screen readers. There is a second screen and you can switch to this with Alt+Tab. This screen can be read by screen readers and will show the setup screen, but you must switch back to the first screen to change the input parameters and switch back to the second screen to read any changes!

The salvation of the DVAP software is that once setup is complete, no further changes are needed. I just ran the software, tabbed twice on the unreadable screen, and pressed Enter. The connection was opened. I could then switch to the second screen and get feedback if required.

In previous accessibility evaluations I’ve written a lot, and recorded a little. This time it seemed sensible to record as much of the Voice Guidance of the TH-D74 as possible, and this actually became a collection of short recordings that now total about 80 minutes. I have placed the separate MP3 tracks into a zipped file, available from the following link:

The separate MP3 tracks are:

The only key combination I will mention here is how to turn on the Voice Guidance. Simply hold the Hash key when you power on the radio.

If you haven’t listened to the audio tracks, you’ll still want to know if the radio is accessible. With some minor accessibility exceptions, the radio is brilliant. Not only does it give unparalleled feedback to the usual analogue operation, it includes full access to D-Star. I was unable to try APRS and the MCP programming software in the limited time I had the radio. I switched on the GPS function so I could use the Nearby Repeaters list, but I did not pursue further investigation of GPS features, beyond this.

The review radio had version 1.0 of the firmware, and at the time of writing, version 1.04 is available. Future firmware updates hopefully also give the possibility of further accessibility improvements.
Once again, Kenwood have approached accessibility very seriously for the blind operator, and done an impressive job.