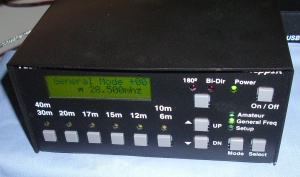 In Summer 2010 I was looking to replace my 3 element 3 band HF Yagi, and I wanted the new beam to work on as many HF bands as possible. The SteppIR antennas were very attractive as they mechanically adjust the length of the elements, giving a good match on the chosen band. I wanted the 3 element SteppIR, with the 30m and 40m option. This would give me coverage from 6m to 40m. The elements are adjusted by moving a metal tape inside a hollow fibreglass tube, and the lengths are measured accurately with the use of stepper motors. I felt the antenna would be ideal, provided I could operate it without sight! After a lot of research, and a long chat with Tim GI4OPH, I was reassured, and I went ahead and bought the SteppIR.

In 2010 SteppIR were selling their antennas with the original control box, and this has now been replaced with the SDA 100. I am basing this evaluation on the original controller, but the new SDA 100 controller has similar accessibility issues, albeit with some noticeable changes. Although I have not used the SDA 100, I have read the manual, and feel able to add a few comments.

The original control box has an LCD display top left, and below the display are a row of square buttons for band selection. To the right of the display is the Direction button, and below this the Up and Down buttons. At the top right is the Power button, and below this the Mode and Select buttons. My controller has 6 band buttons and I understand this will vary depending on the configuration of the SteppIR you purchase. ** The SDA 100 controller has up and down buttons for band changes, but does not have dedicated buttons for each band. Please listen to the MP3 recording for a description of the SDA 100 control box layout.

In its basic configuration, the control box is used manually to select the element lengths for the operating band. The Up and Down buttons will move the elements by 50kHz for fine adjustment. ** Adjustment can be finer on the SDA 100.

In reality, it is slightly more complicated than this, as some of the band buttons cover two bands. For example, on my controller, the first button is used for both the 30m and 40m bands, and the sixth button is used for the 10m and 6m bands.

The 4 remaining dedicated band buttons can be used to cycle through preset points within the band. For example, a press of the 15m button can adjust the antenna for 21.050mHz, the next press moves to 21.200mHz, and a further press moves to 21.350mHz. To complicate things further, if a press of the 15m button took you to 21.200mHz, and you then moved to another band, the frequency would again be 21.200mHz when you next press the 15m button. This behaviour can be extremely useful, but because you do not always returned to the same known point, for example 21.050mHz, using this system without sight requires a good memory and a lot of discipline, mainly because you might not use 15m again for several weeks, and might easily forget it was last on 21.200mHz. If you use this manual approach for adjusting the elements, one solution is to use an accessible SWR meter to determine when the SteppIR is resonant. Tim GI4OPH explains his own ingenious approaches in the Comments following this evaluation.

Saying all this, you will imagine my appreciation when I discovered the control box can be fitted with a transceiver interface board! This is an optional extra, and the interface allows your SteppIR antenna to be driven by your radio. As you switch to a band, the SteppIR automatically adjusts. As you tune through a band on the radio, the antenna automatically adjusts every 50kHz. This means there is no need to ever press the band buttons! If you accidentally press a Band button or the Up and Down buttons, the antenna will attempt to change length, but will then immediately return to the correct setting as the radio is polled. This is how I use the SteppIR controller, and the transceiver interface removes any concerns over frequency adjustment.

There are however several other features on the SteppIR control that either cannot be used at all, or require other strategies. One of the most useful features of the SteppIR beams is the ability to electrically rotate the antenna by 180 degrees, in just a few seconds. The Direction button allows you to select forward, 180, and bi-directional modes. The same button is used to cycle through the three directions, and the status is indicated by two small LEDs. The LEDs are slightly recessed and can be located and interrogated with an audible light probe. ** The SDA 100 controller now has three buttons for selecting the direction. “Norm” for normal forward direction, “180” for reverse direction, and “BI (3/4)” for Bi-directional when controlling a Yagi antenna or three quarter wavelength mode when controlling a vertical.

The Options menu is the place you perform one off setup, such as telling the control box you have the 30m/40m kit, and the extra passive element for 6m. The status of these options can also be determined using an audible light probe. The Options menu is accessed by holding the Mode button for three seconds. ** Access to the Options menu on the new SDA 100 controller has been integrated into the main Setup menu.

Undoubtedly the area with the least accessibility is the Setup menu. Here you can Test the motors, return to factory defaults, select the make of radio, Create and Modify antenna lengths, and Calibrate and Retract elements. Whilst it is possible to memorise the key strokes for some of these functions, the antenna customisation options available in the Create Modify menu are not accessible.

It is likely you will occasionally want to Calibrate the antenna. If you have a power cut when the SteppIR is adjusting, you may find a calibration is required to get back to the correct element lengths. Also, you may more frequently want to retract the elements if there is an electrical storm, or the system is not to be used for a while. Fortunately, I found I could program one of my band buttons to memorise the retracted position, and so just one button press would achieve this without the need to enter the Setup menu. ** The SDA 100 controller has a dedicated button to Retract the elements.

The SteppIR antenna can be damaged if more than 200 watts is transmitted while the antenna is moving. There is a visual indication on the display for element tuning, but no audio cue. There can be some electrical noise on the receiver itself when elements are moving, and Tim GI4OPH describes how this can be useful in the Comments below.

There are a couple of options available to add reliable aural feedback for element movement. These include the SteppIR Tuning Relay Unit from N8LP, and the HamPod SteppIReader from K6DQ. Both of these units are soon to be evaluated on the Active Elements site. ** An additional tuning relay board can be fitted to the SDA 100, and this will prevent RF damage, by interrupting the amplifier’s PTT circuit when the elements are moving.

In theory, you do not need to use an ATU with this antenna. As the antenna can be adjusted for every frequency, you should always have a perfect match. If required, it is very easy to make small adjustments to element lengths and get a low SWR, but you will of course need an accessible SWR meter to check the resonance.

In summary, The SteppIR antenna works automatically if a transceiver interface board is fitted, but there is no accessibility to the Setup menu. The antenna can be used manually with the aid of an aural SWR meter, but the interface board makes adjustment automatic. For complete spoken accessibility, please read the shortly to be published evaluation of the HamPod SteppIReader from K6DQ.

From Tim GI4OPH:
I also have the rig interface capability, however as I tend to do a fair bit of hopping around from band to band, I prefer to adjust the Steppr manually when I need it to be resonant.
Regarding the status of the 30/40M selection button, one can normally tell by comparing the loudness of received signals, and indeed even by the general noise level, on which band the antenna is currently resonant.
If in any doubt, one dit at low power is enough to trigger an audible warning from my P2000 swr/power meter. Again I use the P2000 meter as an indicator to ascertain which segment is
selected on those bands with multiple frequency ranges. When the tapes are moving, the motors seem to produce some electrical noise, which is picked up by the receiver. This has been a source of some complaint on the Steppir reflector, however I personally find it advantageous, in that whenever the hash is present it informs me the antenna is tuning.
I suppose some of these methods are a little unorthodox, but it works for me smile!