The talking multi-meter has not been available in the UK for several years. Some amateurs still own the meters sold by Tandy, but I knew of several blind amateurs who dearly wanted 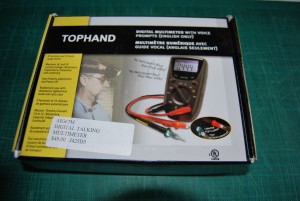 to own a multi-meter that gave verbal feedback.

In December 2010 Tim GI4OPH found a talking meter was being sold by the National Federation of the Blind in the US. When I enquired about costs, it quickly became apparent an individual would need extremely long pockets to bring one into the UK. Although the meters sold for $50 or £33 in the US, because of the handling fees and the traceable delivery method the NFB use, a single meter would cost over £90 to import!

I started to gather interest from other British amateurs , with a view to making a bulk purchase. I soon had ten definite orders, and it was decided we would purchase twenty units, and RAIBC would act as an agent for a bulk purchase. 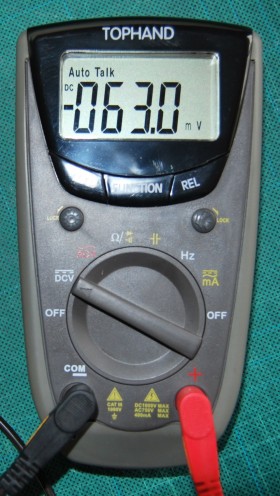 I spent some time looking into getting VAT and Duty excemptions, and despite phone calls and an email application to HMRC, I’m still waiting for a reply months later. A good thing we decided to go ahead with the order, regardless.

The meter itself is a very nice unit, and appears to be extremely well made. It has a LCD display and backlight, as well as a clear female voice.

The meter measures both DC and AC voltages. There are also selections for resistance, Diode, continuity, capacitance, and milliamps.

The manual has been recorded by Chris G5VZ, and is available below.

By Kelvin M0AID
September 2013
It seems the National Federation of the Blind no longer stock the meter, and the 20 units brought into the UK have been sold. Several people have contacted me recently, but unfortunately I cannot help. I suggest you contact the NFB, http://www.nfb.org, and express your interest. If I do hear any news, I’ll post a comment here.

By Mastro Gippo
March 2014
Hi, I’ve seen your article about the LK10 and I’d like you to know that
I made an open source alternative for anyone needing a talking multimeter:
http://www.mastrogippo.it/2014/03/a-talking-multimeter/